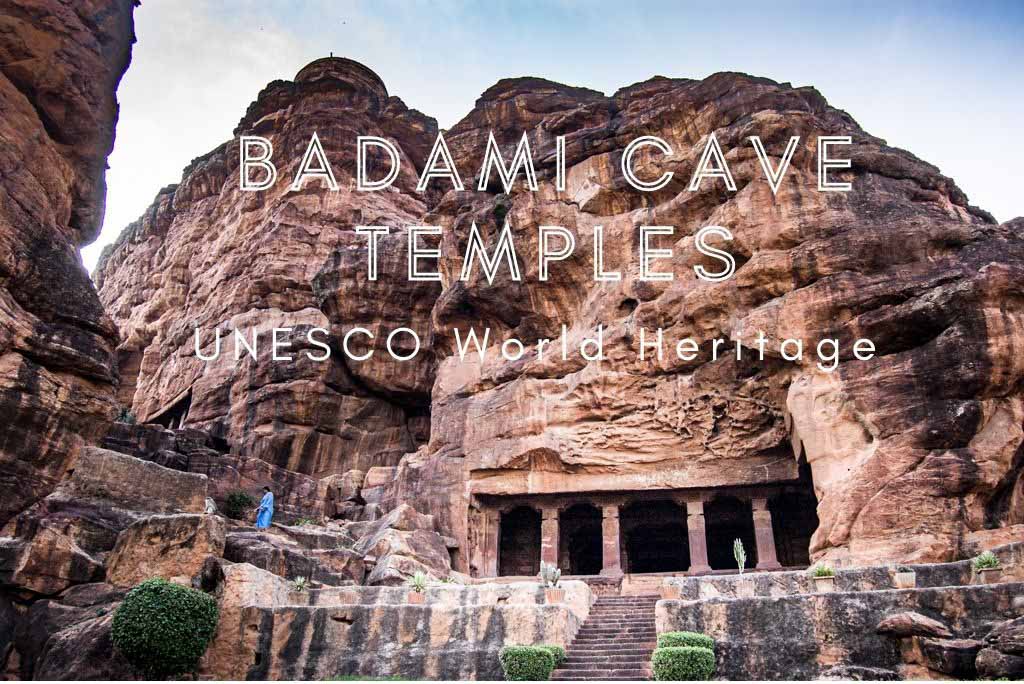 The capital of the Chalukya empire for several centuries, Badami is a small town located in Bagalkot district of central Karnataka.

Its a great experience walking through the red sandstone hills with beautiful carvings in the caves. Being a UNESCO world heritage site, Badami does attract tourists but is still not a very 'touristy' destination. Its difficult to believe that this small town was the place from where places like Kanchipuram and Gujarat were controlled.

We spent the night at a basic hotel and went to the caves early morning.

There are some caves dedicated to Hindu gods while some others depicting Jain gods.

Where Is Badami Caves

Badami Caves is located near the city of Bagalkot in the state of Karnataka, south India.

The capital of the Chalukya empire for several centuries, Badami is a small town located in Bagalkot district of central Karnataka.

It’s a great experience walking through the red sandstone hills with beautiful carvings in the caves. Being a UNESCO world heritage site, Badami does attract tourists but is still not a very 'touristy'  destination. It's difficult to believe that this small town was the place from where places like Kanchipuram and Gujarat were controlled.

The paintings on the ceilings are some of the brilliant examples of early Hindu paintings. They depict the various gods and goddesses from Indian mythology.

The Badami Caves are open from morning to evening - 9am to 530pm.

Badami cave was at one time, the capital of the Chalukya dynasty and dates back to the 6th century.

Badami Caves How To Reach

Badami is located at a distance of about 500 kilometers from Bangalore and can be driven down in about 9 hours.

Badami Caves To Hampi is just 139 kilometers. You can cover it in the same trip from Bangalore.

Badami is located at a distance of 419 kilometers from Hyderabad and takes about 10 hours. The best way to reach is by taking the overnight train.

Hotel Mayura Chalukya KSTDC, Ramdurg Road, PWD Compound is the best place to stay. It is just 1 kilometer from the caves. There are several other low budget hotels as well.

There are some caves dedicated to Hindu gods while some others depicting Jain gods.

This cave is dedicated to Vishnu and is the oldest one.

Shiva as Ardhanarishwara The stairs leading to the next cave. Dargah and the Jumma masjid in the backdrop. You can also see the Shilalaya temple on the hill top. The Dattatreya temple on the banks of Agastya tank and the Shivalaya temple on the hilltop can be seen here. Cave Two The second is dedicated to Vishnu. There are sculptures in his manifestations as Varaha and Krishna. Matya (Fish) Avatar Naga devata Cave Three Cave Three is also dedicated to Lord Vishnu. Here Vishnu is sitting on the coil of snakes. Vishnu with his shankha (conch), chakra, gada(mace), padma(lotus) and dhanush (bow) Vishnu as Narasimha (the Lion God) The pillars and Vishnu Varaha avatar The pot bellied dwarfs   Cave Four Cave four is dedicated to Jain gods. This cave has an sculpture of Suparshvanatha (the 7th Tirthankar) surrounded by the other Tirthankars. There engraving on stone are for games. While the workers worked on the caves, their children were busy playing these games. We came down and went walking along the Agastya tank. The Badami Markaj Jumma Masjid Dattatreya Temple A view of the caves Villagers washing clothes at the Agastya kund (tank) We proceeded to the fort and the Shivalaya temple on the top of the hill. The entrance of the fort. Elephants carved out of stone These structures were used as hideouts for soldiers. The interesting part The very narrow passage between two rocks on the way. A very funny incident happened here which I will never forget, or rather my wife - Smita will never let me forget. When I was halfway crossing this passage, a monkey started coming in. There was space for only one of us to cross. Since it is their territory, I moved all the way back and gave way to the monkey. After he came out, I started again. Smita had a gala time laughing at me as she thought I was scared and went back while I was just being decent. Actually, I was a bit scared. :P The Shivalaya Temple The caves from the top The view from the top was beautiful. We could see the whole town from here. We then went to the Bhootnath temple. The town Badami is also a preferred location for film-makers. Hindi movies – Guru and Rowdy Rathore were shot there. The list of telugu movies include Shirdi Sai, Shakti, Nagavalli, Brindavanam, Dhamarukam, Daruvu, Vikramarkudu, etc. Kannada movies Shivani, Sanju Weds Geetha and Tamil movie Siruthai were also shot here. Around Badami: If you have come all the way to Badami, don’t miss out Aihole (38kms) and Paddatakal (20kms). They are equally beautiful places with outstanding architecture. When to go: The place gets very hot in summers. The best time to go is October to February.

Go early the moment it opens, there will be less crowd.

It will be worth reaching here in the evening, you can shoot stars from here and then go to the caves early morning.

Thanks to my wife Smita for joining me for this tour. Thanks to all of you for reading this blog.

Should you need any help in planning your tour to India, feel free to reach out to me. I can take you to the best places at the right time anywhere in India.