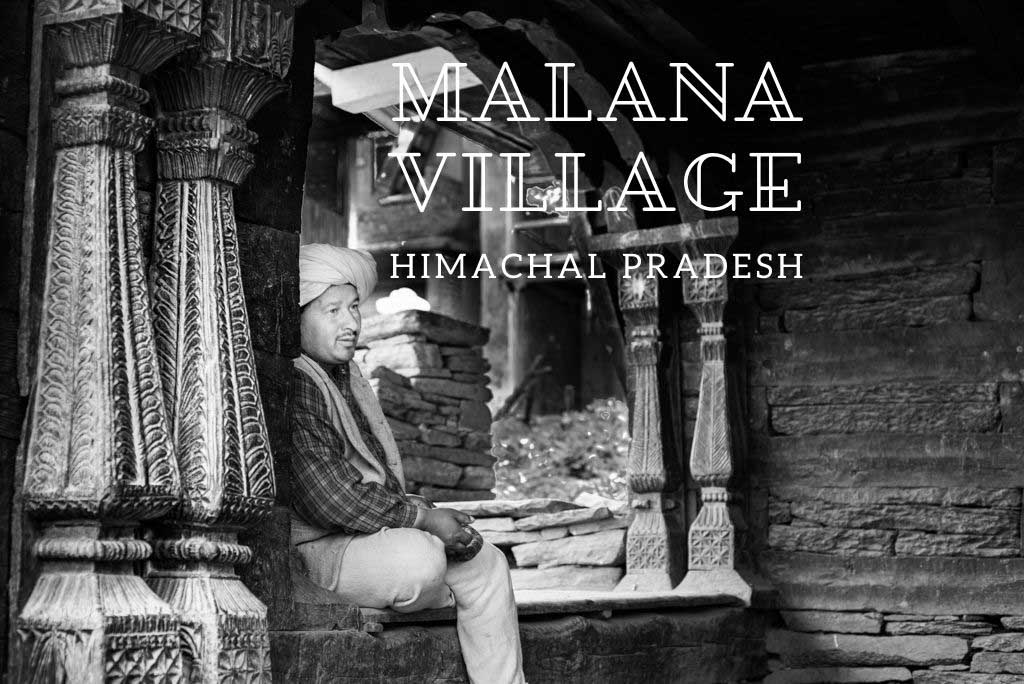 Much before going to Malana village, I had read quite a lot about it. In my imagination, it was more like a old fairy tale village with friendly people and with beautiful architecture. I had high expectations from the place being very photogenic and was expecting this part to be the best part of our Chandrakhani pass trek. What I experienced is as follows...

Located at a height of 3029m, in the vicinity of Deo Tibba and Chandrakhani peaks, Malana is a small village in Parvati valley in Himachal Pradesh.

This was definitely one of the most unique villages that I have seen in India in many respects.

Just after entering the village, there was a small hotel with a board written in Israeli language. This place hosts many foreign visitors, most of who come in search for the most sought after - 'Malana cream' - a drug that comes from these valleys.

Oldest Democracy in the world

Malana is believed to be one of the oldest democracies in the world. There is a village-council of 11 members and they are believed to be the representatives of Jamlu Rishi, the village god. Any decision taken by them is considered to be final and abiding. Of late, many villagers were not happy with the decisions taken by the village-council and had approached the district court in Kullu to settle disputes. Since then, the council have stopped holding court and taking decisions.

There are several theories regarding the origin of the village. According to one thought, the villagers are the decedents of the Aryans. A story does that when emperor Akbar was suffering from a serious disease came to the village, the people of Malana were able to cure it. Akbar was so pleased that he gave tax-exemption to all the people residing in the village.

Another school of thought suggests that Malana was founded by remnants of Alexander the Great's Army. However, there is no link in the language between Greek and Kanashi.

Worth mentioning that the village of Dha-Hanu near Leh, Ladakh also believe the same

Contrary to what I had read, Malana is definitely affected by modern civilization, more than most of the interior villages in India. Almost every kid had a smartphone. In fact, some of the kids were checking their board exam results on their cellphones. The small village had an excellent 3G service which was very rare during the whole route of our trek. Every house had a dish antenna for the satellite television service.

Most of the houses were of brick and mortar with tin roofs replacing the traditional wooden houses with the beautiful engraving. The process started in the 1980s when the villagers became rich selling 'Malana cream'. After the fire in January 2008, all the houses that were reconstructed as modern houses since the cutting of trees are banned.

The Malani speak Kanashi (a mixture of Tibetan and Sanskrit dialects) and they are very conservative about it.

Though the children of the village are discouraged to speak in any language other than their native language, times are changing with the advent of television. Like other kids, they all watch tv and can understand and speak in Hindi well.

On the vice versa, the people of other villages are discouraged to speak in Malani language even if they know it.

The main occupation of the villagers are farming and cattle rearing. The women are involved in weaving shawls.

The Malana Cream or Malana Crime

Malana Cream is the term given to the hashish grown here, which is one of the most sought after in the world. The police had launched a drive to stop the cultivation of cannabis. This has resulted in a steep decline in the number of tourists (mostly foreigners) in recent years who come in search of charas or hashish. Nowadays, the villagers are shifting to dense forests for cultivation. The villagers blame the government for their apathy as they lost their source of livelihood due to these restrictions.

I had read that it is available for sale in the village. When we were walking around, one of the villagers approached us if we were interested in buying some.

The first view of the village. While we were going, we met a lot of foreigners walking up.

Malana is situated beside the Malana Nala which joins the Malana river below. There is a central part of the village in front of the temple where all the men gather and interact socially. Most of them play the game of dice, locally called 'panji' One of the temples with exquisite carvings. One thing ubiquitous in Malana were the warning of the consequences of any tourist touching the houses (even the walls) or stepping to a part of the courtyard. You need to pay a fine of Rs.1500/- or more. They use this money to sacrifice an animal to restore the sanctity of the place. The people of Malana consider any non-Malani as inferior and untouchable. It is very evident from their body language when an outsider approaches them. If they touch us (or we do), they become impure and they need to go through the purification process by a sacrifice. There were some construction labors building a house. They did not look like belonging to the place. I asked them which place they belonged to. They answered that they were from Lucknow. That was kind of funny for me as the rules were flexible. Also, exceptions are made for the houses which are being used as hotels or guest houses for travelers. We came to know that a decade ago, even entering the village with shoes was banned. Though most of the elders were not coming close to us, the kids were quite enthusiastic and had fun with us. As they consider any non-Malani as an untouchable, we were not allowed to enter the temple. The villagers went inside the temple with shoes though. Some were smoking as well in the temple courtyard. A kid talking on a smart-phone One of the head of the Malana village. The rich carvings on the temple. There are many double and triple storey houses made of wood. Some painted with vibrant colours. Unfortunately, due to construction costs and ease, most new constructions are of brick and mortar. This is the only village of that size that I saw had a bank. It was quite evident where the money came from - the Malana cream. The Punjab National Bank branch in Malana. This place is also not untouched by Narendra Modi's presence. A local sweet shop in the village. Girls coming back from school. Most villagers were not very friendly, and did not allow us to take pictures. I was fortunate that she allowed me for this one. Satellite television dishes where ubiquitous. Contrary to my imagination, this village was quite dirty. There was a lot of litter on the the village road. There is no waste disposal system in place. There is a Hindi medium village and the teacher is not a resident of Malana. The view from our campsite at Malana. We were in Malana for a night. The next morning, we set out to the road through the trekking route. It was raining and that made the route look more beautiful. We stopped at some rivulets taking pictures before getting lost in the civilization again.

How to go to Malana village

Though we covered Malana during our Chandrakhani pass trek, there were other easier alternatives. The nearest airport is Bhuntar 40kms away. Kullu and Manali are 50kms and 90 km respectively. The village is a steep 3km walk from the nearest motorable road.