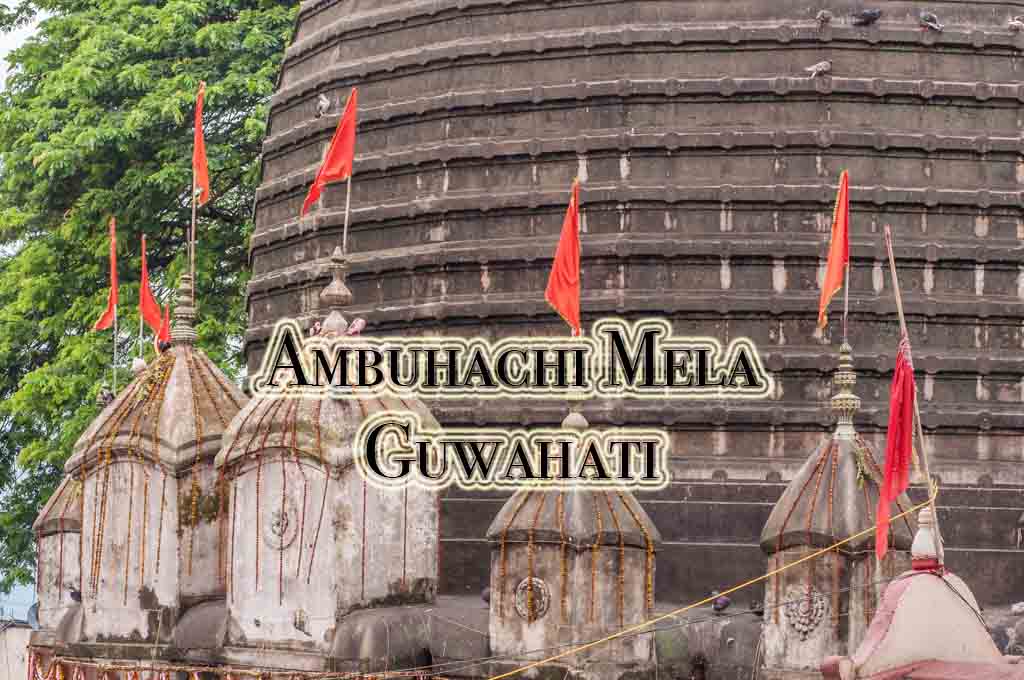 Ambubachi Mela or Ambubasi festival is an annual fair celebrated for four days in Kamakhya temple, Guwahati, Assam during the Assamese month of Aahar (mid-June).

It is believed that the presiding deity of the temple Devi Kamakhya (a form of Shakti) goes through her annual cycle of menstruation during this period. The temple is closed for three days during this period and the doors of the temple open on the fourth day when devotees throng in a long queue to get a glimpse of the goddess..
The deity is believed to have been there since prehistoric times. There is no man-made statue of the goddess but a stone of shape similar to the vagina.

There are thousands of people who come from all over India, especially West Bengal, Bihar, and Assam to witness this festival and take blessings from the goddess in form of a small bit of cloth which is believe to be wet with the menstrual fluid of Goddess Kamakhya.

It is also one of the 51 Shaktipeeths. According to legend, when Vishnu cut Sati’s body into 51 parts, the vagina fell at this place.

This is a must-do pilgrimage for the tantric cult sadhus.

The temple is situated on top of the Neelanchal hill. There are over-loaded vehicles that take you to the top.

Ambubachi Mela happens in the Assamese month of Aahar (mid-June).

Since I was a child, my father sent a money order to the priest at Kamakhya temple every year. In return, after about a month, we used to receive a packed with some prasad and a small piece of red cloth. That’s the only thing I knew about the Ambubachi festival. Later as I read more about the place, the more I was determined to see the event.

Attending this festival was in my To-do list since quite some time because of its eccentricity. Last June, I got an opportunity to go to Guwahati for work, right on the time of Kamakhya fair. I’m always very lucky, you know.

I chose to walk up and fortunately, I was not the only one.

An old lady taking rest on the way. As I gained height, I got better views of the city I met many sadhus on the way. Many of them were from West Bengal. Drinking is a part of the Tantrik cult practices. I saw people drinking on the roads. I took a quick shot. There were many temporary taps set up by the government for the convenience of the pilgrims. Most of them cannot afford to stay in hotels and sleep in the open. As I started approaching the temple, it got crowded. There were many shops on the way, temporarily set up for the fair. Since the temple was opening after 3 days, there was a huge rush to see take a glimpse of the god. The first view of the temple. More sadhus with interesting faces. This foreigner sadhu was caressing his pigeon before leaving it at the temple. The crowd was huge and sometimes people got unconscious. The Bharat Scout and Guides volunteers were doing an excellent job to provide a support system. This lady was getting her kids ready, they will then go around the temple asking for donation for their miniature god. One very interesting practice I saw here was offering pigeons to the goddess. There were many devotees who bought pigeons and placed them on the temple walls after offering their prayers. I came across many sadhvis (female sadhus) with long matted hair. A sadhu from Nepal People apply vermilion on the statues, especially on the vaginal parts. Animal sacrifices are common in this temple. The sadhu is caressing his goat before the act. The worship items of a sadhu. Its a practice for all married women to apply sindoor (vermilion) to each other  after the pooja. The flowers being taken for worship. Media was there trying to show the hardships of the people. People were in queue standing for hours and some were saying that there is no proper crowd management. I found it to be absolutely fine in such a huge volume of crowd. The sadhvi with long matted hair. The Bharat Scouts and Guides volunteers were helping in crowd management. Flowers for sale at the temple. This is the temple tank where people take bath before going to the temple. Standing in the same place since midnight of the last day, these people were really upset. There were other people who got into the queue just because they paid a priest of the temple. Unfortunately, like most temples in India, the ministers and police officials are given preference, while the common people just keep waiting. Fortunately, I was able to make them smile, for a moment at least. There are many who sell exotic plant produce during the mela. These are sought after, by the sadhus and devotees. Here, the seller was taking out the rudraksha’s from the fruit. The volunteers taking a break and having fun. As the demand for pigeon was more, so was the supply. Some sellers were carrying basket-full of the bird for sale to be offered in the temple. A Sadhu carrying his goat to be sacrificed at the temple. The last view of the temple.