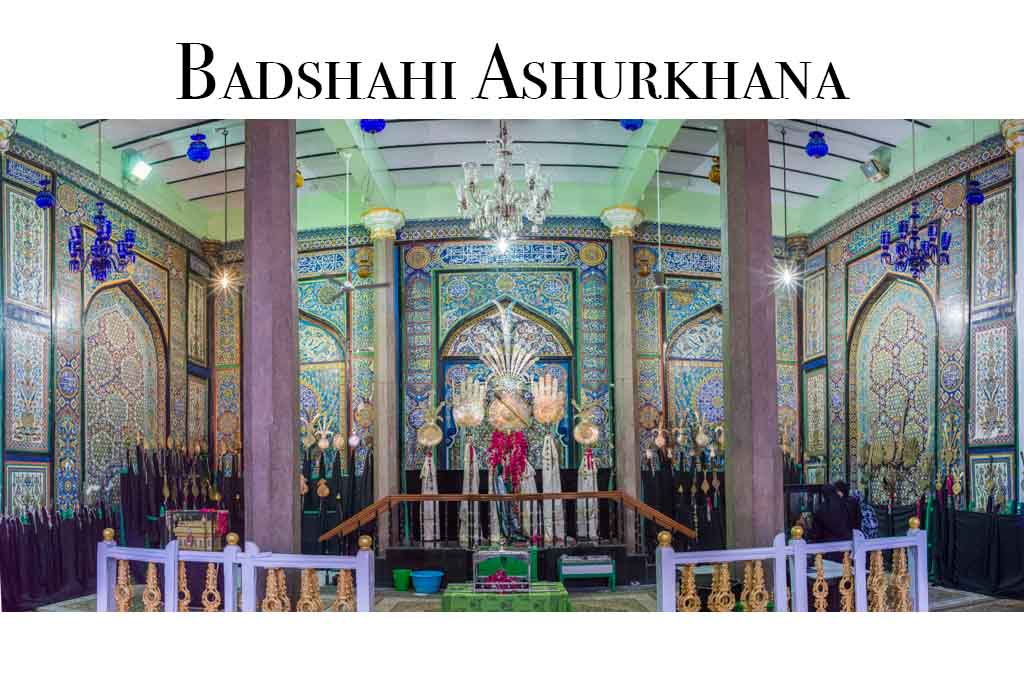 Ashurkhana a public place where the Shias congregate and mourn during Muharram.

I was fortunate to pay several visits to the place, during my Photowalks in Hyderabad. That helped me capture the beauty of the place on different occasions.

Badshahi Ashurkhana was constructed by Mohammad Quli Qutub Shah in 1594 along with the construction of the Charminar for installing Alam-e-Mubarak of Imam Hussain. In 1687, the place was converted into Bandi Khana (Carriage Shed) and remained in the same state for several years. in 1178 Hijri, the Bandi Khana was removed and the Alam e Mubarak was reinstalled and the religious activities were resumed. The brilliantly colored tile mosaic decoration was completed under Abdullah Qutb Shaj in 1611, and the outer halls and wooden colonnades, as well as the entry gate were added by Nizam Ali Khan in 1764.

The architecture of Badshahi Ashurkhana

This building is definitely the most beautiful of all constructed by Qutab Shahi kings. The various parts of the Ashurkhana include Naqar khana, Niyaz khana, Abdar khana, Langar Khana, Guard rooms and the Mujawer House. The main building which is structured as a pavilion with walls on three sides enclosing a platform where alams are displayed during Muharram.

Alams are symbolic representations of the martyrs who died on Ashoora day. Each alam is in memory of each of the 72 persons who died with Imam Hussain – his brothers, sons, nephew, friends and followers.

In 2006, The Nizam Club got the award for `sensitive restoration' of Badshahi Ashurkhana.

This place has a lot of visitors during the month of Ashura where Shias come to mourn. During Muharram, alams are set up in the building which is structured as a pavilion with walls on three sides enclosing a platform where alams are displayed. Unfortunately, in some areas of the wall, the tiles with carvings were damaged, the walls were painted to restore them. The building of Badshahi Ashurkhana. Review of this blog by Zohair Abbas Moosvi, the 10th descendant of Badshahi Ashurkhana family- Hello Saurabh! I hope my message finds you good. I just happened to land in your profile somehow and I saw some really amazing stuff. Way to go man! Also, I'm the tenth descendant of Badshahi Ashurkhana family and I'd like to tell you on behalf of my family that we are honored to have you at our place. Stay blessed. Take care!